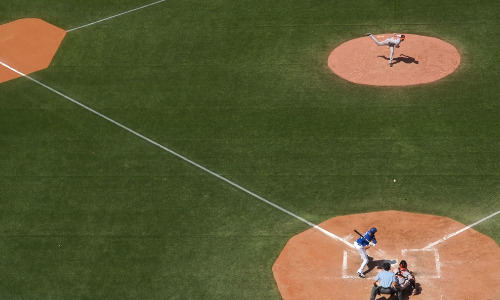 Many showed no hesitation in stating the swing — and subsequent results — are very much like last year’s. Maddon, meanwhile, says it depends on whom you talk to.

“I had a scout sit in my office two days ago and say the opposite,” Maddon stated over the weekend. “He thinks it’s entirely different. He kind of liked it. Regardless of what a scout says in the stands, it doesn’t really impact my feelings at all. I know what I’m seeing — a totally different swing. The guy that says it’s the same, I’m totally disappointed in the scout, actually.”

If that’s the case, then Maddon would be upset with a half-dozen AL and NL scouts who simply don’t see a big difference in Heyward from last year, although they all admit his stance and setup have been altered. Heyward was 5-for-35 (.143) this spring heading into Sunday night’s Cactus League game after hitting .230 with a .306 on-base percentage last season, which prompted him to get benched for a portion of the playoffs.

Since then, Heyward has worked as hard as anyone in baseball — no one disputes this — in an attempt to regain his swing from 2012, when he hit a career-high 27 home runs for the Atlanta Braves. Following the 2012 season, many in baseball believe his swing and approach changed, partly because he moved from the middle of the order to the leadoff spot.

Maddon will hit him much lower in the lineup to start the 2017 season. But, despite the fact that his stance and setup look different, scouts still see the same swing path.

“He has an arm bar [straight arm] and he’s late,” one NL scout said. “When you’re late, everything breaks down.”

Others echoed those exact sentiments, although, to be fair, no scout has seen all of Heyward’s at-bats and few had seen him in batting practice. That’s where one is most likely to see Heyward’s progress, given he has launched balls over the fence in a manner he has not done previously as a Cub. The “arm bar” isn’t apparent and his timing obviously isn’t an issue in BP, but that progress hasn’t carried over to spring games yet.

“He’s such a hard worker and spring is the time to work it all out,” another NL scout stated. “I’m optimistic. So let’s see how he does in the regular season.”

That scout was only one of seven who spoke with ESPN.com who voiced such optimism, but there won’t be a clear answer on Heyward until he gets a good amount of regular-season at-bats.

In terms of looking for a change, those scouts who watched him play this spring didn’t see the progress they thought they might after a winter of work. Meanwhile, the Cubs say he just needs to get his rhythm and timing down.

The bad luck reasoning probably won’t resonate with fans — it was used a lot last season, as well — though Maddon did point out some of his tougher at-bats this spring have come against left-handed pitchers. Plus, two hits and two RBIs against Team Japan on Saturday don’t count towards his spring stats, so the eye test is the only real indicator right now.